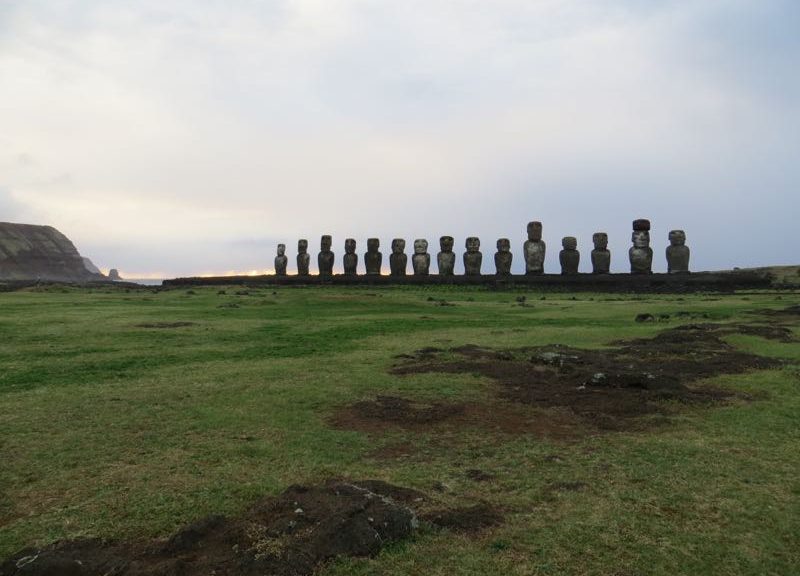 I didn’t get Easter Island at first. Easter Island, Rapa Nui, the magical remote island of such mystical history.

I had wanted to go for a long time and watching yet another documentary exploring its time of the complete deforestation of the island and the downfall, and almost complete destruction, of its civilisation and its people, made me plan it. It looked so isolated, windswept, barren, inhospitable. And the moai (the large stone statues) looked so august, similar to Stonehenge, in their mysteriousness.

The weather was clear and bright as I arrived at the small airport with a couple of palm trees in the car park.

It didn’t feel right. There were too many trees. The deforestation of the island is believed to have led to much conflict and turmoil and thus plays a hugely important part of Easter Island’s mythical history.

I walked around the small town of Hanga Roa on a pleasant, breezy day and saw my first moai. It’s in a pretty spot in the harbour and the day was bright with the moai backlit. I was looking at a moai. I took a photo. It was lacklustre. I waited for the awe. I didn’t feel it. I sat down. I felt that would help. It didn’t. 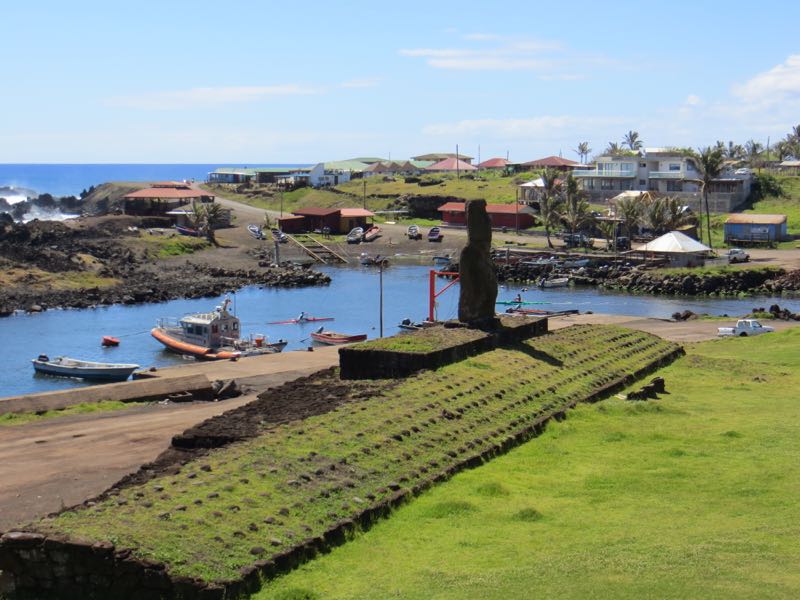 But it was only a solitary moai, that had been artificially moved into that position, like a 3D Dummies Guide to Moai, so I didn’t lose hope. Besides no one ever said “If you’ve seen one moai, you’ve seen them all.” (Ed’s note: I’ve since Googled that and the search did bring up two results but neither were in support of the statement).

The harbour was quaint, there was kayaking. Further along the coast, there were surfers and an astroturf football pitch. It all seemed… inauthentic.

This is, of course, completely nonsensical, and the reforestation is for very good reasons, but, at the time, it still felt out of place, or at least out of place for what I wanted it to be.

Sometimes your expectations are so high that they’re too high and when what you’re faced with inevitably fails to live up to those impossible expectations you can’t shake the disappointment.

It was the moai, the iconic stone busts, I was disenchanted with. I couldn’t explain why.
I walked along the coast to Ahu Tahai. This was more like it. It contains a raised altar with a row of moai. I was there in the early evening under a largely clear sky with a host of other tourists. As the sun set, I thought it was extremely pretty, as sunsets generally are, that fallback option of anyone with an Instagram account, but I wasn’t moved, touched, I still longed irrationally for that magic. 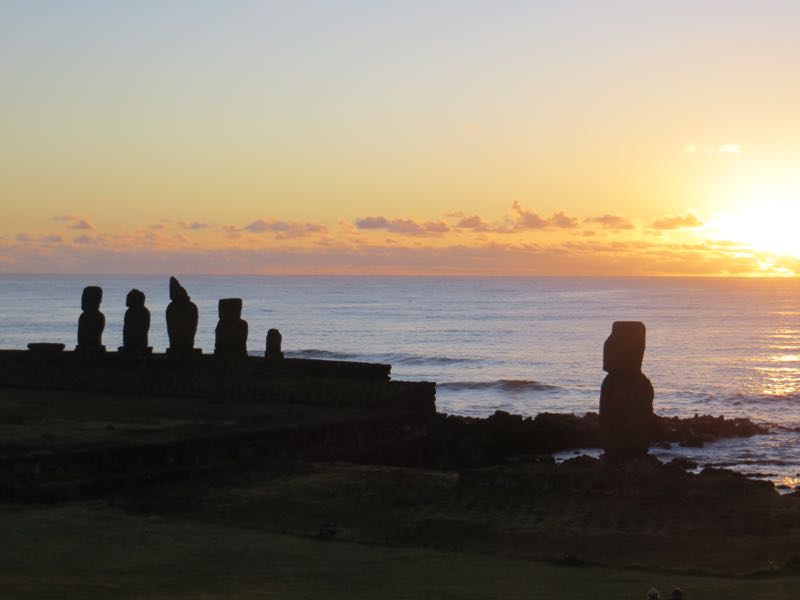 I took a full-day tour. The landscape’s grassy rolling hills were more English than I expected. The land and rocks where visible were of a more volcanic nature than would be expected of those European islander’s sensibilities, but it didn’t feel as otherwordly as I’d imagined.

The guide was extremely knowledgeable about the statues and the history and passionate about the people. I was still interested in the island’s history, legends, people and I learned a lot about the time the moai were created, moved, erected, toppled and restored. We visited Ahu Tongariki, the largest ahu, which was a grand row of these proud statues. We visited the quarry (Rano Raraku) where they were carved, scattered full of stone busts, half-built and half-buried, like a giant’s mannequin factory went bust but the receivers never came.

She talked and talked and I listened and I asked questions and I learned. But I remained nonplussed, and in my despair I got more dismissive. The guide talked, proudly, about the construction of the moai by the “master carvers”. Screwing my nose up, ignoring the clear whiff of anachronism, I thought “Master? Really? It’s a case of giving someone with an ounce of strength and creativity some stone and chisel and saying ‘knock yourself out.’”

The stone busts seemed basic, almost crude and smaller than I expected. I hadn’t had that moment. I wanted that moment without really knowing what it was. 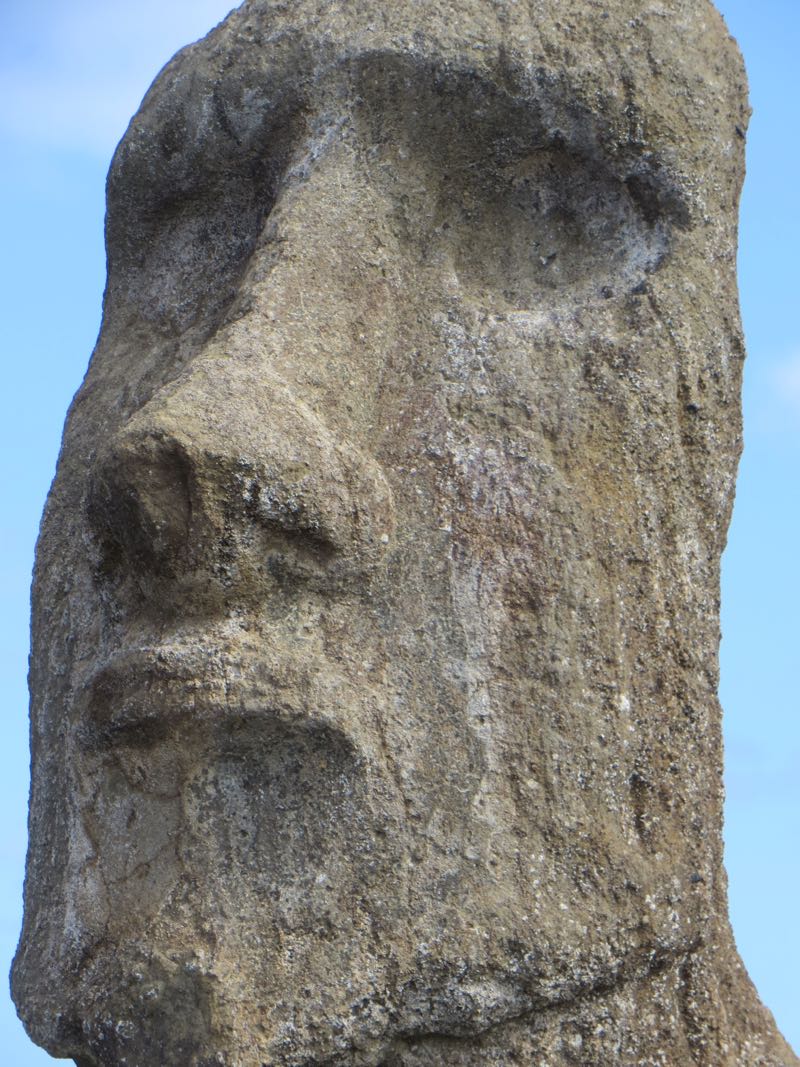 We went to Anakena, the only real beach on the island. It felt more tropical with the palm trees, frond cafes and tourists baking on the sand. There are two ahu (raised platforms), one with a solitary figure and the other with seven, although only five are still standing. I learned more about the myths and history, it was interesting. I took some more photos, then we got back into the bus. 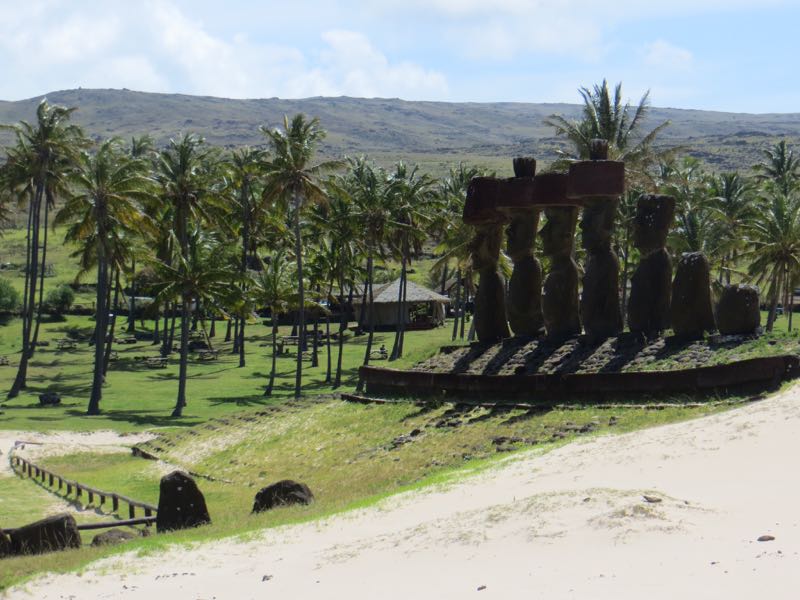 I was metaphorically raising my finger to the heavens like Adam in Michaelangelo’s famous scene on the roof of the Sistine Chapel waiting for the inspirational touch in return.

I was going to go back home and tell everyone Easter Island was, that scoundrel of a word, nice. Meh… Reviewers have been excommunicated by Tripadvisor for less.

My final day I rented a jeep and got up in the darkness to return to Ahu Tongariki for sunrise. I wasn’t alone by any means, it’s apparently the best place for sunrise, but as I waited for the day to break behind the row of statues I started to get it.

I can’t explain it. But sat there, in the chilled air wearing almost all my clothes, I started to see the moai from their increasingly illuminated silhouettes in a new light, literally and figuratively. I appreciated the setting, the wildness, windswept wild horses on the overlooking hills. And the carved statues, transported to this cove for whatever political or spiritual reason, took on a nobility. I was able to rid myself of the modern biases and sniffy attitude. It wasn’t quite St Paul on the road to Damascus, but in the moment of consideration I felt some of the enchantment I had hoped for but thought I wasn’t going to find.

The sunrise itself was actually disappointing. The sun rose reluctantly behind cloud cover that meant morning never really broke, it just shuffled away from the night. There was no dramatic dropping of the black curtain for the stage of moai to be spotlit by bright sunshine, but by then it didn’t matter. Maybe I preferred it. 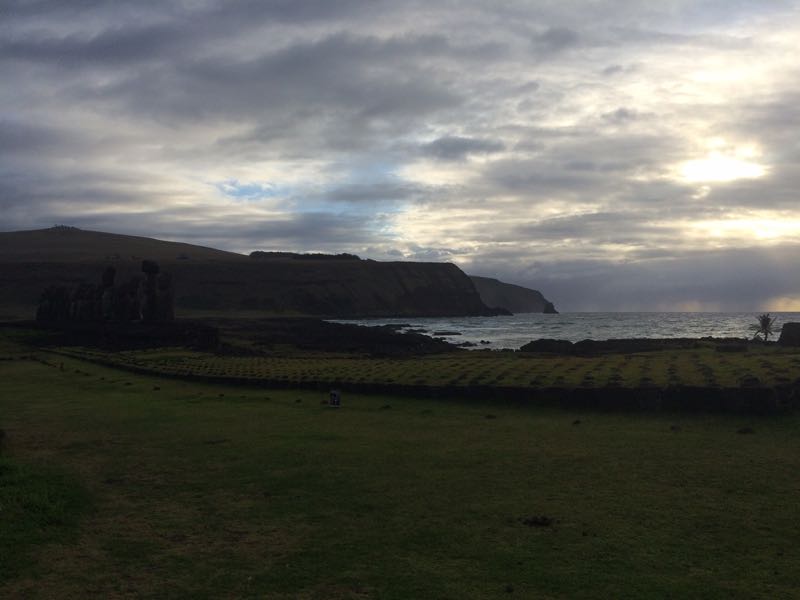 The moai are basic, and on the surface, they are crude. But comparing what the Easter Islanders could do with civilisations in other countries with massively different topography and trade routes with the exchange in materials and knowledge that brings makes no sense at all. Comparing it to contemporaneous structures in Asia, South America or Europe is completely idiotic. I knew that, even when I was doing it.

As is noted on Wikipedia “Easter Island is one of the world’s most isolated inhabited islands. Its closest inhabited neighbour is Pitcairn Island, 2,075 km (1,289 mi) to the west, with fewer than 100 inhabitants. The nearest continental point lies in central Chile near Concepción, at 3,512 kilometres (2,182 mi).” Perhaps the clear blue skies and warm days just didn’t enable me to conjure up the feelings I expected like the oppressive grey cloak.

I left to drive to Orongo, but stopped shortly afterwards seeing a sign pointing down a path to the costal edge. There was a cavern with intricate wall paintings as the sea dramatically crashed on the rocks outside. Perhaps the heavy sky enhanced rather than hindered my appreciation of the island, but I was seeing things with different eyes.

Orongo, the traditional ceremonial centre and village for the Rapa Nui, on the crater’s edge of the Rano Kau volcano, was the centre of the birdman cult in the 18th and 19th century. One of rituals was a dangerous annual race that saw men compete to be the first to return them first manutara (sooty tern) egg of the season from a nearby rocky island Motu Nui. An unbelievable test of strength, skill and bravery. Nowadays that would be something clearly made for television in Japan or with Bear Grylls. But with this change in mindset I was able to respect the small stone dwellings and the bold, precarious placement of this sacred area for what they are, what they meant and what they represent.

Whether it was the change in weather, the solitude or just time I don’t know. Perhaps it was an odd case of mentally recaliberating unreasonable expectations with sunshine at odds with the dark history of the island I’d morphed into dark skies and desolation.

When I mentally reconciled the place, the people, the time, I realised how special Easter Island is. “Appreciate” seems to be the word I turn to when describing my feelings towards the moai on the final day. It seems wishy-washy, but it’s caused by a vocabulary too limited to describe how I see this remarkable speck in the Pacific Ocean.

I traversed the island that day under the liberatingly gloomy sky visiting some different sites and returning to others I’d be too before. It had taken me until my last day on Easter Island to do what everyone else does on sight of their first moai, and thankfully I’d found better words to describe Easter Island than nice.

Easter Island is expensive. The LAN flight from Santiago is a monopoly and with the pulling power of the island, flights are in high demand and priced accordingly. However, it should be added that it is a five-hour trip over the Pacific Ocean and I didn’t have any problems with the cost.

Restaurants and hotels are over-priced too, undoubtedly a mixture of the cost of importing and a captive audience. And I understand that too. I do recommend the subs at Club Sandwich in Hanga Roa though. They were big, tasty and I think a couple could just order one, share it and see if they wanted another.

I stayed in a six-bed dorm in Campanie Timpanie y Moena. It was over-priced, but not more than anywhere else as far as I could tell and I thought it was fine.